References to spirits and ghosts predate the Bible. 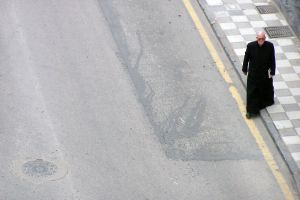 Whether or not people believed those were spirits of dead people… That’s another matter.

Historians have documented attempts to release or banish ghosts in ancient Greece.

Earlier accounts of ghosts appear in Mesopotamian records. Search for information about the “gidim.” You may be surprised at the amount of ghost lore before Abrahamic history.

Some translations of gidim suggest malicious, demonic entities. Others, breaking the word into giplus dim, translate it to “shadow person.”

In extant Babylonian lore, many people became ghosts. Noted exceptions included those who died in a fire, and those whose bodies were left to rot in the desert. That may account for the practice of burning corpses or setting them out to rot in elevated locations “closer to the heavens.”

Records from the Epic of Gilgamesh (ca. 15th century BCE) describe the ghostly experiences of Enkidu after his death. In that era, people may have tried to help or appease ancestral ghosts and other spirits.

For many centuries, the topic of ghosts was controversial and dangerous. People avoided specific references to them. Especially during the most extreme years of the Inquisition, the word “ghost” suggested something demonic. Studying old diaries and correspondence, you may need to read between the lines to recognize hauntings.

We can’t be sure when people began to think of ghosts as we describe them today. However, spirits of the dead may have wandered in this world as far back as recorded history.

In 1965, it became the Sacred Congregation for the Doctrine of the Faith (SCDF). Cardinal Joseph Ratzinger (Pope Benedict XVI) became its prefect.

The organization still exists, and it’s the oldest congregation among the nine in the Roman Curia.