This is a question many of us ask.

Some ghosts appear to have died with unfinished business.

Other ghosts seem reluctant to accept that they have died.

Either way, time has passed, and they need to move on.

Unfortunately, we can’t even prove that ghosts exist. No one can prove why one spirit becomes a ghost, but another one doesn’t.

In folklore, stories such as The Canterville Ghost try to explain why some people become ghosts. Those stories follow a formula.

2. He or she has something left to do or say.

3. The ghost connects with someone who’s in the world of the living.

4. The unfinished business is completed.

5. The ghost is grateful for help received, and crosses over.

In real life, most hauntings aren’t that simple.

– Sometimes, the ghost needs help and accepts it.

During investigations, stories can emerge.  That may happen often if someone on your team is a psychic or a medium. 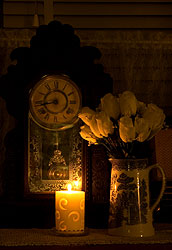 Some ghost hunters are psychic. That attracts many people to this field. At any investigation, about 30% will say they’re sensitive or psychic.

When you’re at a haunted site, focus on one thing at a time.

Are you a medium?  That is, are you the go-between – or medium – conveying messages between the spirit world and our realm?  That can be an important personal or spiritual mission.

Don’t be offended by that comment. Maybe your psychic impulses are confirmed by your science-based tools, such as EMF meters.

Perhaps the scientific investigation is guided by your psychic insights

As a ghost hunter, which path are you on?  Are you both a psychic and a scientific investigator? (I am.)

Identify which role you’re focusing on during that particular investigation. Then, be sure your team knows what you’ll be doing.

Your work as a psychic medium might be part of your team’s goals. Some teams like to include a medium.  At the very least, you can detect the best “hot spots” for your team to focus on, first.

Some teams refuse to let psychics join. (I’m not kidding. But, I do understand when it’s a religious issue, or if any team members have had bad experiences with psychics.)

In general, keep your priorities straight. If you’re like me, psychic readings can become very emotional. Make sure your team is okay with that on that investigation.

And, even if they say they’re prepared for whatever happens, be sure you’re not distracting them from their research.

For example: If your team is recording some great real-time EVP, they’ll be focused on these things:

– The silence (or noise) that’s ideal for their EVP recordings.

– The quality of that recording.  (If they’re listening to it in real time, they may need to adjust each microphone until the quality is at its best.)

– How believable the recording will be.  (If the neighbors are having a loud party, it’s difficult to defend EVP recorded nearby.)

– Information for future study. (Note the GPS of the microphone location. Also record where it is in the room, and its position related to nearby people and objects.)

If your psychic “chatter” (vocal or moving around) interferes with their EVP efforts, it’s reasonable for your team to object.

(When I’m in “psychic mode,” I sometimes babble. I articulate what I think I’m sensing, to see if the spirit confirms it. I’m rarely loud, but even low muttering can affect EVP quality.)

Also, during a startling, scary, or purely scientific investigation, it can be easy to lose sight of the humanitarian and spiritual aspects of this work. Be patient with yourself — and especially with others — if this occurs. Everyone has a “Dude, run!” impulse, now and then. That’s especially true of people who have a singular, skeptical view of ghost hunting.

Likewise, you might need absolute silence to focus on your psychic connection to spirits at the site. Some mediums find electronic devices unnecessarily distracting. However, many ghost hunting teams consider those tools the essence of the team’s efforts.

Remain respectful of your individual and team goals. In the heat of the moment, don’t let stress and frayed nerves highlight your differences.  Remember why you’re there… all of you as a team and as individuals.

Before an investigation, reach an agreement about your work. Decide how you and your team can work synergistically.  (This can take some trial-and-error experimenting, over several weeks.)

During at least 90% of team investigations, I rarely mention what I perceive as a psychic. My attention is wholly on the scientific evidence we’re collecting.

Later, I may return to the site informally.  Often, I’ll invite a couple of other mediums so I get a second and third opinion.  We’ll  focus on spiritual and energy-related research.  It’s completely different from my work with scientific tools.

I can either pay attention to my psychic impressions, or I can look for scientific evidence.   I can’t do both. It’s like trying to play the piano and the violin at the same time: Possible, but not practical.

Your experiences may be different.