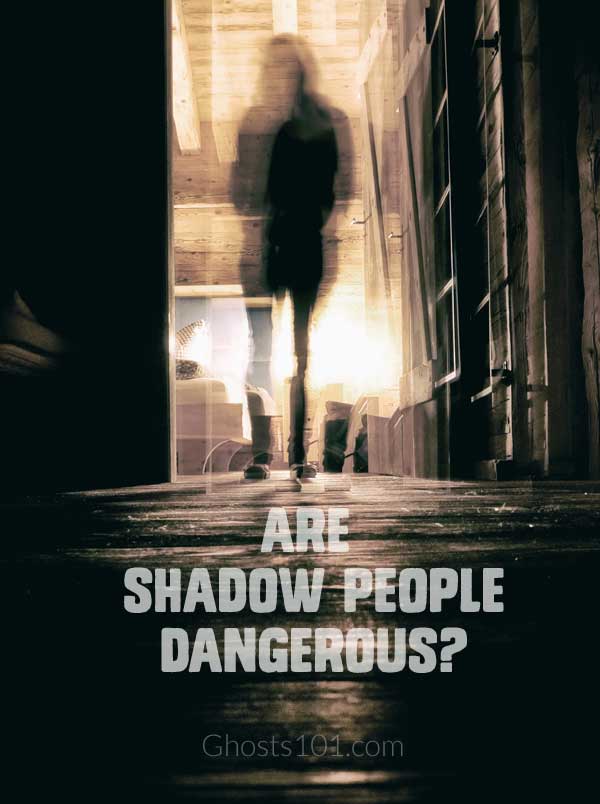 Shadow people aren’t new, but in recent years, they’re being reported more often. Are you afraid of them? So far, they seem harmless. Here’s a brief history of shadow people, and what we think we know. (We’re still learning.)

I’ve received a lot of emails asking about shadow people.

Frankly, we see a lot of weird things at haunted places.

A brief, moving shadow or two…? Not so unusual.

A full, shadowy apparition…? That used to be something rare. Now, they seem to appear more often.

The first time I heard the phrase “shadow people,” was in a conversation with Ghost Hunters’ Grant Wilson. Oh, I knew what he was talking about, but — at the time — I had no idea that lots of people were seeing them.

Since then, it seems as if many more people are seeing shadowy figures. Is it because they’re looking for them? Or, maybe some entities aren’t as reticent as they used to be. 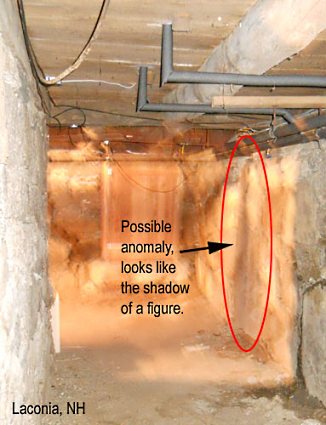 Over the past couple of years, I’ve seen many shadow people in TV show footage.

I’ve also taken photos of one, in a weirdly haunted private residence in Laconia, NH.

I saw what I thought was the shadow of a living person, and I decided to get some photos for future reference.

The best picture is shown at right. In real life, his shadow looked like a normal person’s shadow… except that the hat shape looked like something from the Colonial era, or very early 19th century.

It looked like someone was walking on the other side of the basement, in front of a light source.  (That’s why the photo is a little blurry. He didn’t pause and pose for the photo.)

And then it walked away, moving towards the wall at the far end of the basement, and the figure vanished.

Since many people in New England take part in Colonial and Revolutionary War re-enactments, I expected to see someone – in costume – when I rushed ahead to see who’d caused the shadow.

No one was there, and we’d have heard footsteps, running, if someone had dashed upstairs. Had it been a prank, the basement was too large for anything but the hastiest getaway.

We checked everything to see if a normal shadow could explain it. We found nothing. The basement wasn’t very cluttered, so no one could have been hiding from us, either.

Only one other person was in the house during the investigation, and we’d have heard his footsteps. Plus that, his build differed completely from the shadow. We found nothing to explain this figure. At least two of us saw it.

I’ve heard speculation that shadow people are connected with the phantom “Hat Man.”

The reports have major differences. Read the Gaia description of “Hat Man.” He appears at night, and wears a long trench coat, a black three-piece suit, plus a hat with a brim. He’s between six and ten feet tall. His eyes may glow red. He whispers warnings or baffling messages to his victims, and he consistently instills fear.

In my opinion, that’s very different from a shadow person.

But, I may have photographed a “hat man.” That’s what people said when I posted my photo of a figure inside a former bank (robbed by Bonnie & Clyde) in Old Town Spring, Texas.

I didn’t like him, but he didn’t scare me.  His eyes didn’t glow. He didn’t whisper anything, either.

So, he doesn’t fit the “hat man” profile, but I did see him as a shadow. Does that make him a shadow person? Maybe. The problem is: in the photo, he’s not just a shadow.

A while ago, I turned on a ghost-related TV show.  Then, I heard one of the show’s stars declare that shadow people are killers.

I think it’s irresponsible to tell homeowners that shadows in their homes might kill them. (In Dr. Who episodes? Sure, it’s fiction. In really life? No.)

I don’t mean to trivialize the terror someone can feel when they see a shadowy figure they can’t explain.

If your instant reaction is fear, and your instincts tell you to get away from it… run. In  paranormal research, trust your gut feelings. It’s better to have a “Dude, run!” moment and feel silly later, than put yourself in harm’s way.

If you feel as if any entity – living, dead, or something in-between – is dangerous, get away from it immediately.

But, I’ll be honest. If a shadow person has ever killed or seriously injured someone, I haven’t heard about it.

Also, from most reports I’ve heard, shadow people don’t have features. Yes, it might feel as if they’re looking at you.

But you can’t see its face. Maybe it is looking at you. Or, maybe it’s looking for a place to hide.

I’ve seen the Ghost Hunters’ episode where a shadow person seemed to peek out from behind something. The shadow was probably looking toward the investigators, but we can’t be certain of that.

Shadow people look like shadows. Other than that… it’s all guesswork for now.

Ghosts or something else?

Shadow people might be ghosts that manifest as shadows. Maybe they’re not able to create EMF spikes or generate EVP, and they can’t rap on tables, but they can create shadows. 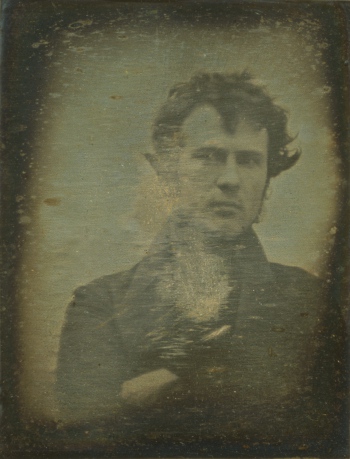 Shadow people may be something entirely different from ghosts.

They might be fearful apparitions, trying to hide from us.

Shadow people might be minions of malicious or even demonic entities.

Then again, shadow people might be aliens in a form we didn’t expect.

Or… all of the above.

I’m not trying to be flippant. My point is, we need to keep an open mind.

So far, they’re seen most often in haunted locations. That suggests a connection to ghosts.

But what if they’re something else?

Well, aliens are outside my field of study. However, if this concept intrigues you, Nick Redfern may be the best resource.

If you have the stomach (or curiosity) for that kind of topic, you may like his book, Paranormal Parasites. I haven’t read it yet, because Redfern’s research focus is very different to mine.

His insights may be relevant if you’ve encountered a shadow person and sensed that it was deeply, powerfully evil.

Meanwhile, the following story isn’t about ghosts, but it might indicate an alien element. (Or, it may have no connection to shadow people. It’s just something strange, not ghostly.)

Dark portal to the night sky?

One of the most mysterious shadows I’ve seen… well, it wasn’t a person at all. But, it was odd, and it was a shadow, and I’ve never found a reasonable explanation for it.

One evening in 2009, my husband and I were driving from New Hampshire to Dragon Con (Atlanta, GA), where I was a guest speaker.

The sky was dark and a little cloudy.

Driving south on I-95, we saw an odd column of darkness on the left side of the road.

It seemed to be in back of a stand of trees, and about 100 yards from the shoulder of the highway. It was like columns created by searchlights, but this column was darker than the sky, not lighter.

I thought it was fascinating, and I wondered how they’d created that effect. It was a great alternative to a spotlight.

(At the time, we didn’t realize it was an anomaly. At Dragon Con, I asked a few scientists what might have caused it, and they said nothing like that was possible.)

With the increasing reports of shadow people, was that column a conduit for them?

That anomaly may have nothing to do with shadow people. It’s just an idle thought to consider.

But are they evil?

The shadow person I photographed (my NH basement photo, above) was about 30 or 40 feet from me, and I sensed nothing at all from him. He was just there.

His form didn’t seem to suck up light, like some energy vampire. He wasn’t menacing or cowering or sending evil death-ray energy at me.

He was just a shadow. For all I know, he was an energy echo from the past, or something in a parallel reality. He may have been an extraordinary form of residual energy, or… yes, he may have been a ghost.

Until we know more about shadow people, keep your distance.

So far, I haven’t seen or heard credible reports that suggest they’re dangerous. 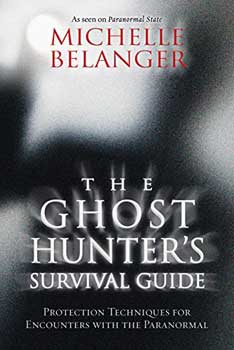 Are they ghosts? I’m not sure. I’m still looking for more consistent reports, to make sense of why people began seeing them – in large numbers – several years ago.

For now, if you’re worried about a shadow person – or any paranormal entity – harming you, Michelle Belanger’s book is the most thorough protection guide I’ve read: The Ghost Hunter’s Survival Guide: Protection Techniques for Encounters with the Paranormal. She’s compiled all kinds of protections, from folk magic to religious approaches.

I won’t pretend I understand (or agree with) everything she describes in the book. But, for now, it’s one of the best-researched – and most complete – books on the topic.

Meanwhile, as I said, err on the side of caution. If you see a shadowy figure and you feel uneasy, get away from it and perhaps leave the site altogether. I don’t think shadow people are dangerous, but I’d hate anyone to put themselves at risk, if I’m wrong.

For answers to more questions like this, read my book, 101 Ghost Hunting Questions, Answered.

This podcast is also available at HollowHillPodcasts.com (hosted by Libsyn).