Hardly anyone sees an apparition and has a photo that shows it. That’s true, even when the figure is seen by the entire team, as plain as day.

More often, your photographs will show orbs and streaks of light. No one saw them when the picture was taken.  Usually, we have no idea why.  It just happens.

Learn exactly how your camera works.

Digital cameras capture images differently than film cameras do. Know the difference. Learn what can make your camera take “weird” (but normal) photos.

I like digital cameras because I can take hundreds of photos during an investigation, and it costs nothing.

(I usually wait to analyze pictures at home or at the hotel.)

In my book, Ghost Photography 101, I recommend using a simple camera that you’re comfortable with. 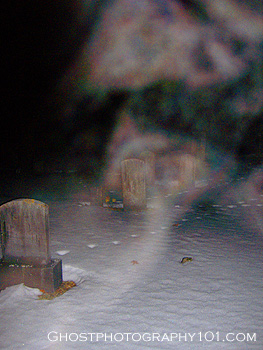 See how that camera responds to unusual weather and light conditions.

Do what you can to create false anomalies, like orbs. After that, you’ll know what to watch out for during investigations.

For example, the weird photo on the right shows my breath. I exhaled as I took the photo in a haunted cemetery on a winter night.

It’s a very strange-looking image. If I didn’t know better, I’d believe it was a ghost photo.

So, test every camera you use for ghost hunting. See what “fake” ghost photos would look like.

Then, go to a genuinely haunted place. (I recommend haunted cemeteries, because they can have more ghosts per square foot than any other location.)

Compare your photos with the fake ones. That’s the very best way to learn to photograph ghostly anomalies.

You’ll be confident when you capture something truly eerie in a photo.

And, if you’re like most beginning ghost hunters, your first genuine ghost photo will be a thrill.

For even more answers and insights about ghost photos, and ghost hunting in general, read my book, 101 Ghost Hunting Questions, Answered.

As an author and an Amazon affiliate, Fiona earns a small commission if you click on an Amazon link and make a purchase.