If you’re looking for a haunted place nearby, ask teenagers.

I’m serious. They usually know many local urban legends, and some of those tales will point you to actual haunts.

Yes, some teens may laugh at your interest in ghosts. Expect it. Laughter is a way to deal with discomfort.

But even if they don’t believe in ghosts, they usually know which places are supposed to be haunted.

Local historians can be good sources of information, too.

Ask a parent or grandparent, especially someone who’s lived in the community for 20 or more years. He or she may know regional folklore. 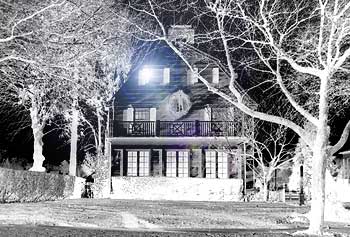 Look for back issues, published years ago. They usually include even more stories about local haunted places.

Regional books may describe ghosts and haunted places in your area. Check your public library and local bookstores.

But keep in mind: many ghost hunting books weren’t well researched. Authors and publishers threw them together to cash in on the popularity of ghost hunting.

To be blunt: A lot of books copy from each other, and simply rewrite stories they found online.

Before taking those sites seriously, verify their stories.

Of course, if you’re a first-time ghost hunter, I recommend haunted cemeteries, for several reasons.

Meanwhile, remember that some of the most famous haunted places aren’t so haunted. Often, you’ll encounter more ghosts on your own. They can be close to home. Sometimes very close to home.

Here are some not-so-haunted places places you may have heard of.

41 – Ghostwatch (1992) “This BBC drama from Halloween 1992 was so realistic that viewers thought it was for real. But it was never meant to be a hoax, just a sophisticated drama about a live TX broadcast (hosted by Michael Parkinson) which saw a ghost called Pipes appear in an allegedly possessed house.

Generally – especially if you’re a new ghost hunter – it’s best to rely on first-person stories in your community. You’ll find plenty of resources at your public library, and local historians who specialize in “folklore.”

Ley lines and other patterns can lead you to even more haunts. But, that’s an advanced technique. You’d need a lot of research experience – and patience – to use it.

For now, rely on local resources. With them, you should find plenty of good ghost stories and eerie haunted places to investigate, close to where you live.