Do ghosts linger after a haunted house fire? Maybe. I’m fairly certain the ghosts remain, whether a house is there or not.

So, the short answer is: From my research, when a haunted house burns, the ghosts remain. 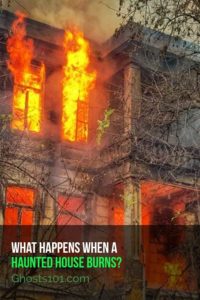 Many ghosts seem to be tied to the location rather than the structure on it.

Yes, there are some exceptions.

For example, while “green lady” ghosts may actively protect their homes, they may be unique in that kind of attachment.

According to one story about Henniker, NH (USA), the ghost of “Ocean Born Mary” helped the fire brigade at her haunted house’s fire.

I’m not sure whether she would have remained at the site, if the house was destroyed.

The Haunting of Hill House

In 2018, the Netflix series, The Haunting of Hill House, suggested that the house should not be burned. It was suggested that, as long as the house remained, the ghosts could live there, happily.

I saw a logic gap there. In the series (spoiler ahead), people (alive or dead) in the “ghost reality” seemed to see Hill House in its former glory.

But, in real life, the abandoned house was overgrown with vines, and moldy.

So, why wouldn’t the ghosts still see “their” house, as it originally was, even if all that was left was ashes?

I don’t have an answer for that.

A good example of a haunted site – and a related fire – started in November 1942.

That’s when the Cocoanut Grove nightclub in Boston (MA, USA) burned to the ground. That was a tragedy with enormous impact, and it changed building codes across America.

Today, the site of the fire – at what used to be 17 Piedmont Street – is mostly a private parking lot in Bay Village, a residential neighborhood.

The parking lot is protected by a strong fence. As far as ten feet from it, ghost hunters still record baffling EMF spikes, eerie EVP, and “hot spots” (thermal). Also, we see interesting, light-related anomalies, even during the day.

I’m not sure the site was haunted before the fire. Since then, it’s one of the most unusual, highly active sites I’ve visited. So, though the original building is gone, it’s definitely haunted… intensely haunted.

The house or the land…?

Now and then, a client asks me about her newly-built (but haunted) house.

Sometimes, it used to be the site of another home or building. The old one either burned down, was torn down, or fell into decay. (More often, the site has a more ancient history, including Native American associations.)

In general, I don’t believe any ghost is injured when the home it’s attached to is destroyed. I’m not sure that it’s “set free” by the fire (or bulldozing, or whatever), either.

In some cases, it appears that the ghost remains at the location. The ghost seems to wait until a new house is built on the same site. Then it may stay, or decide to move on.

I’m not sure what to think of the Amityville Horror House. The evidence is conflicted, at best. However, it seems as if something odd had lingered there, and affected Ron DeFeo.

A few years ago, I researched the house for an Armchair Reader book. I discovered several odd aspects of the story, “hiding in plain sight.”

I don’t believe the Amityville haunting will be over until all of the evidence is found, investigated or debunked, and the true stories told. 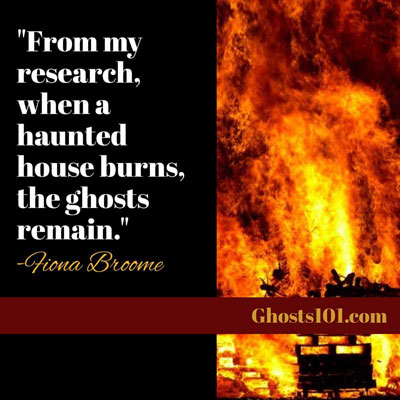 When the ghost stays with pieces of the house

I can think of one case where a ghost (or ghosts) remained attached to the physical structure rather than its former location.

That’s the Tyng Mansion in Tyngsboro, Massachusetts (USA). The house was haunted long before it was destroyed by a devastating fire.

(The fire was rumored to be arson.)

What remained at the site — mostly charred building materials — was bulldozed. They pushed the rubble into a slightly marshy field next to the home’s foundation.

(You can visit the site. It’s next to the parking lot at the Boston University Corporate Education Center on Tyng Road in Tyngsboro.)

The remaining foundation of the house seems normal and generally inactive.

Instead, I’ve seen EMF spikes around the overgrown, somewhat marshy, rubble-strewn land next to it. That’s where you’ll see evidence of decaying outbuildings.

You’ll also find what’s left of the house, after a 1982 archaeological team removed everything of historical value. (It’s not a safe place to investigate, due to uneven ground, lots of brambles, and a large overgrowth of poison ivy.)

Other than that, I’ve never investigated a site where the ghost (or ghosts) clung to the actual building instead of the land it had been on.