First, in my opinion, we’re not sure what ghost photos really are.

But, the images may not represent actual spirits or ghostly energy.

We call them “ghost photos” because we take them in haunted places, and weird images show up.  We’re not sure they’re actually ghosts.

It is extremely rare to photograph an apparition. Most “apparition” photos have been debunked. Often, it was disappointingly easy.

When those were first in the marketplace, I received dozens of faked photos. The effect can be attractive and eerie, but if you know what to look for, you won’t be fooled.

Here’s a screenshot of one ad, including the typo in the description: 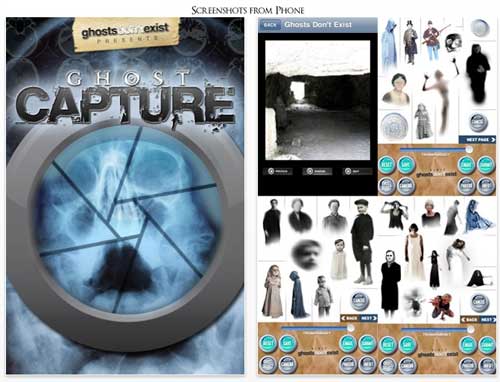 This problem returns in cycles. As of late 2016, I’m seeing more fake photos.

I guess people forgot about those old apps, or a new generation of ghost hunters never knew about these apps in the first place.

If someone shows you a ghost photo that looks like an apparition, a Google image search might be a good idea.

Shadow people seem to be easier to photograph. I’m not sure why.

This is important: We’re still trying to understand what shadow people are.

They may be ghosts.

They may be something else.

I’ve photographed a shadow person and the image was clear. One of those pictures is shown, on the right.

I’ve never photographed an apparition that looked like a solid or translucent full-body figure with features.