Ghosts and flashlights… they’re an interesting mix. Can ghosts really communicate by turning your flashlight on & off?

Ghosts don’t actually turn the flashlight on and off. Not with a switch or lever, anyway. 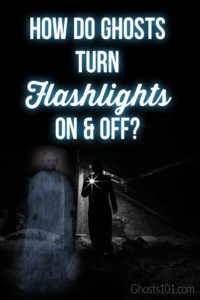 The effect comes from a loose contact between the batteries and the light bulb.

A ghost might be able to move the flashlight just enough to make the light blink on for a split second.

Or, ghosts might generate EMF energy. That’s a popular theory. If it’s true, a small amount of energy might reconnect the battery and the light bulb.

Either way, some ghosts and flashlights seem to have a connection (no pun intended). Ghosts might be able to communicate through a loosened flashlight. That’s how it’s looked in tests on TV and in the field.

Use the kind of flashlight that turns on and off with a gentle twist of the flashlight case. The Mag lite brand is the most popular.

But, inexpensive clones can work just as well, as long a the flashlight has a metal case, not plastic or resin.

Note: I’ve talked with the staff at Mag lite. They were baffled by my questions. They wouldn’t tell me which metals are in their flashlight cases are proprietary. Still, they insisted that conductivity wasn’t likely.

So, any flashlight may work equally well.

How to get the best results with ghosts and flashlights

Here are steps to use a flashlight to communicate with ghosts.

This kind of real-time communication can be exciting and produce remarkable results.

Sadly, there’s at least one big problem:  This is far from actual, scientific evidence.

Heavy footsteps, a passing truck, a nearby train, or music with a heavy base can be enough to make the flashlight flicker.

In other words, a blinking flashlight isn’t proof of anything, even if it seems eerily accurate and consistent.

How I begin each flashlight session

Generally, I ask questions with known answers: “Is my name Fiona Broome? Flash the light once for yes.”

Then, “Flash the light once if I’m male, twice if I’m female.”

(I mix things up. I want to be sure the flashlight isn’t responding to footsteps in a nearby room, or infrasound from trucks or an underground stream.)

I’ll continue questioning the ghost for several minutes. (You could think of it as “establishing rapport” rather than commanding the ghost to perform.)

“Are we in [name of location]? Flash once for yes.”

“Did George Washington (or some other impossible name, like Queen Elizabeth II) live here? Flash once for yes, twice for no.”

If the answers aren’t at least 75% accurate, I don’t bother with a flashlight “seance.” The controlled responses must be more accurate than a coin toss.

If the flashlight responds accurately enough, I set up my equipment nearby.

My usual tools include EMF detectors, real-time ghost communication devices, and EVP recorders. We set them up and resume our investigation.

We continue to ask questions, and check our other tools for anomalies that happen at the same time as the ghost seems to flicker the flashlight.

Flashlight communication with spirits can be exciting.  However, I believe you need more evidence, collected at the same time.

After our investigation, I look for documented history that supports or refutes what the ghost seemed to tell us via the flashlight.

Unless historical evidence exists, the rest is speculation. It might seem reliable, but I’m looking for more than just a consensus from a loosened flashlight and a few other tools.

I want something on paper that’s independent of any ghost investigations. That means census records, vital records (birth, marriage, or death records), court documents, and so on.

This article wandered far from the flashlight topic. However, “talking” flashlights are such unreliable evidence, they shouldn’t be your only focus in an investigation.

Besides… if the ghost really is that communicative, you might miss other investigative opportunities, like EVP and ghost photos or video.

But yes, flashlight communications can work. And, as part of a pre-investigation visit – or during your regular research – the answers can help you identify your ghost and why he or she haunts.