I’ve tried several different kinds of ghost hunting apps. Many of them rely on EMF anomalies to produce flashing lights and sometimes spoken words. Some show the direction the energy is coming from.

Initially, I dismissed ghost hunting apps as toys. After all, how could a free or  99-cent app work nearly as well as my $300+ tools?

The lunch that changed my mind 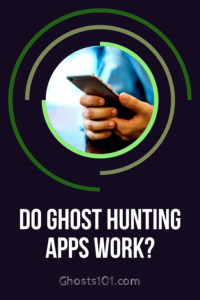 Several years ago, when I was a speaker at a Canadian ghost hunting event, a few of us went out to lunch.

Once we were seated in the restaurant, one of my companions took out her phone.

It had a ghost app on it. I’m pretty sure it was the Ghost Radar app. (You can download it, free, at Amazon.com, and there are newer -but not free – versions, as well.)

She put the phone – with the app running – on the table where we were eating.

Another companion said that, if the app really worked, she’d like a message from her mother.

The app started “talking.” It said several words, none of which seemed significant to the woman who’d asked the question.

However, as I sat there, nearly every word the app said… it described the mural on the wall, next to us. (At the time, I felt like I was the only one who was putting the words together, and seeing a clear picture… no pun intended.)

My companions didn’t seem interested. They were talking about that night’s scheduled investigation, and how we should prepare for the chilly, windy weather ahead.

After several minutes, I finally interrupted them. I pointed to the mural since the words were a match.

Then I pointed to the signature on the mural, also indicated by the app. (I believe some of the words it said included “word,” “sign,” and “picture.”)

The woman who’d asked the question nearly lost it. The first name of the artist was the exact same, slightly unusual name as the her mother.

(I didn’t know that was her mother’s name when I pointed to it.)

Maybe it was a coincidence, but none of us thought that. Not with the clarity of the indication, once I pointed to the mural.

(To me, it had been obvious after the first three or four words. The app kept “talking” only until my dining companion finally paid attention to it. And, at least 80% of the words were clearly about the signature on the mural.)

So, that was my first experience with a ghost hunting app.

Even if that had been my only experience, it was powerful enough to change my mind in favor of ghost hunting apps.

The second experience was a couple of years later. I was in a NH cemetery with psychics Lesley Marden and Sean Paradis.

We were testing equipment, collectively. That is, each of us was working with some kind of ghost hunting equipment. We wanted to see if the results correlated.

In addition, we drew on Lesley’s psychic skills, since her accuracy rate is high. (Sean’s is good as well, but different. Mine is not as sharp, around 85%.)

Sean was running the Ghost Radar app on his phone, and it indicated an energy form (or ghost) approaching us.

My Ghost Meter Pro was running in “seance” mode.

Lesley was chatting with us when she had the strong impression of a spirit named Jonathan.

Then, the Ghost Radar suggested that the ghostly energy was within 15 feet of us.

At the same time, my Ghost Meter Pro signaled the option of conversation with a spirit.

Lesley was sure the grave of that ghost was outside the enclosure where we were.

That seemed confirmed by both the Ghost Meter Pro (in yes/no terms, anyway) as well as the words “said” by the Ghost Radar.

So, we left that enclosure.

We followed directions given to us by dowsing rods, the Ghost Meter Pro, and the Ghost Radar, plus Lesley’s guidance.

We walked about 60 feet when the Ghost Radar shouted “Pennsylvania.”

We laughed because we were in Concord, New Hampshire, nowhere near Pennsylvania.

However, the Ghost Meter Pro also signaled something nearby. At the same time, the dowsing rods came to a halt, pointing at one very tall monument to the left of us.

When we got there, the grave belonged to a man named Jonathan. He’d been killed at Valley Forge. It’s in Pennsylvania.

There is no way that had been set up by any of us. It also confirmed that ghost hunting tools can work together to refine research results. Mostly, I was very impressed that the Ghost Radar app had been exactly right.

Everything it said was an exact match for the grave marker, in ways we didn’t have to contrive to fit.

So, I’m now a firm believer in the merits of ghost hunting apps.

Do apps like Ghost Radar perform better with certain investigators? Are some people “lightning rods” attracting psychic energy? Does it help if they’re psychic?

At other investigations, some ghost hunting tools have seemed worthless until the right person came along. Then, the devices went from near zero accuracy to at least 70%.

On its own, I’m not sure that the Ghost Radar app is as useful as other, dedicated ghost hunting tools.

Nevertheless, for the price (especially the free version) and convenience, apps may be worth trying.

Here’s a video showing the Ghost Radar app in use. It’s not a thrilling, frightening video, just something that shows what to expect in a typical, “haunted” setting.