I’m not sure why some ghost hunters (especially on TV shows) always turn off the lights before they investigate a haunted site.

Of course, darkness makes the show more dramatic. Night vision cameras always give an eerie look to the location and the people in it. 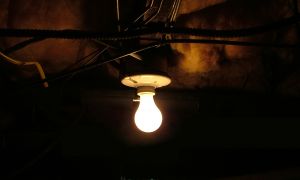 Normal EMF can be reduced by turning off as much electrical equipment as possible.

So, we may turn off lights, especially fluorescent lights, at least for a few minutes.

Also, researchers’ other senses can be heightened in the dark. They have to rely on sounds, smells, and so on.

In addition, some ghost photography is more effective in full darkness, with just a momentary flash of the camera’s light.

There may be other reasons to turn off the lights, but those are the ones that make the most sense, as a field investigator.

My advice: when you’re on an investigation, leave the lights on as much as possible. That’s for safety, so you can see where you’re walking, where stairs or openings are, and so on.

Once you’re more familiar with a location, it’s okay to turn the lights down, or even off. Night vision equipment can be an asset, but as long as everyone knows areas and objects to avoid, low-light conditions can be okay.

If you’re taking ghost photos, the best results seem to come from flash cameras in dark or low-light conditions. I’ve run extensive tests to understand why this helps, but — so far — it seems like an anomaly. (I’ve ruled out reflective surfaces, dust, insects, and so on.)

But, in general, it’s safer to keep the lights on. At the very least, don’t turn the lights out until everyone is familiar with the site. That’s for safety, and has nothing to do with the ghosts.