“Paranormal” means something that’s outside the range of normal.

In other words, all unexplained hauntings are considered paranormal.

However, not all paranormal activity involves ghosts. 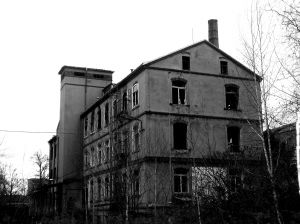 A house with paranormal activity (but no ghosts) could have demons or faeries.

Its visitors might be creatures from cryptozoology, or aliens.

I suppose vampires and zombies could be in the mix, too. (Yes, I’m being flippant.)

Likewise, a haunted house may have ghosts as well as other entities, including demonic activity.

This is especially true of houses built on Native American sites, such as NH’s Spalding Inn. (That’s the hotel formerly owned by Ghost Hunters’ Jason Hawes & Grant Wilson, and their families.)

I had no doubt that the Spalding Inn was haunted, but at least two ghosts. However, I also saw startling evidence that other entities were there… far more than the “ghost cat” that Jason’s wife (and many others) had seen.

In the U.K., I’ve seen a mix of paranormal activity at buildings near early Anglo-Saxon cemeteries.

One example: The Falstaff Experience (also known as Tudor World) in Stratford-upon-Avon (England).

It has a wider range of unique phenomena than I’ve witnessed, anywhere else.

I doubt that all of it is ghostly, but — for now — I have no better labels for the weird things that occur during their ghost vigils.

Most investigators default to the term “paranormal” for sites like that. It covers every possibility.

It might be a construction issue. It could result from tilted floors, unshielded electrical wiring, or a deep, underground spring.

Never leap to conclusions when a house seems haunted.  It may have nothing to do with ghosts, but still be paranormal.