Where did the questions & answers come from? 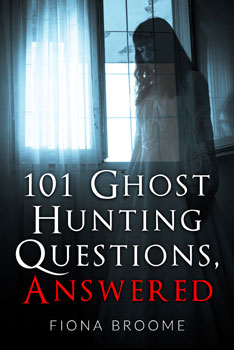 In 2014, ghost hunter Fiona Broome gathered the most popular questions about ghosts.

She answered them in her book, 101 Ghost Hunting Questions, Answered.

Then, in 2016, she posted the most popular questions and answers at this website.

In 2020, Fiona updated all of the answers, and republished her book in paperback as well as in Kindle.

The most popular questions – and answers – are at this website.

For over 30 years, Fiona Broome has been an author, researcher and paranormal consultant.

She studies unexplained phenomena in everyday life. Her main focus has always been ghost research. (She also studies faeries and some crypto zoology, and – inadvertently, around 2009 – popularized the Mandela Effect concept.)

An unabashed geek, Fiona analyzes and sometimes predicts paranormal activity. She studies patterns of all kinds, including ley lines.

In ghost hunting, Fiona is fascinated by the reasons why some places and object (or the people around them) seem haunted… and others aren’t.

Luckily (for her, anyway), she usually finds answers in history and geography.

Sometimes, real history doesn’t match popular “ghost stories.” That’s exactly why it’s important: It gives us new clues to why some sites report paranormal activity, and where to look for even more.

Since 1999, she’s continued to research paranormal activity and what causes it.

For several years, Fiona was a regular invited Guest at Dragon Con and many paranormal conferences in the U.S. and Canada.

Today, Fiona prefers to focus on her research and writing.

Due to Fiona’s ghost hunting expertise, she was the model for the “Fiona” character in  Trickery Treat, the final novel in the first Charmed TV series books.

She’s also been a consultant for several other authors and a location scout (and historian) for TV series.

Most recently, Fiona has been updating her old books, working on new books and free ghost hunting courses, and making her websites more useful to visitors.

You can see her latest news at Facebook’s Fiona Broome – News, and her occasional posts at Twitter. Her author website is at FionaBroome.com.

Fiona Broome’s book, 101 Ghost Hunting Questions, Answered, is being updated. The new edition will be in bookstores later in 2021.