After season 11 (2016), new episodes of the Ghost Hunters TV show were not scheduled for SyFy. That was reported in various media, including Jason Hawes/TAPS Facebook page.

As of 2017, the best way to contact the Ghost Hunters team is through their TAPS website (that site’s contact form wasn’t working the last time I looked, but you can email [email protected] ) or Facebook. You’ll also find Jason on Beyond Reality.

Here’s my original article about contacting Ghost Hunters. It includes other ways to reach the cast, SyFy, and information about joining a similar TV show. 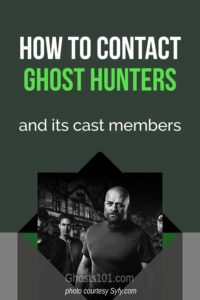 It’s easy to contact Ghost Hunters’ TV stars and producers, if you’d like to. It depends on what you’re looking for — to follow the stars’ careers, learn more about the Ghost Hunters TV show, or meet the cast & crew, personally.

One general way to find information about the Ghost Hunters’ TV show – through Season 11 – is via SyFy.

That’s the cable network that ran Ghost Hunters for many years. You can visit the site the Syfy.com website and – if it’s still there – click on the link for the Ghost Hunters TV episodes.

However, if you want to contact Jason Hawes or Grant Wilson, Dustin Pari, or any cast member from the many seasons of Ghost Hunters, look for their respective websites.

If you want to be part of a show like Ghost Hunters, look for casting calls at the Syfy.com website and similar pages at other networks’ sites.

Or, search online using phrases such as “casting calls,” “ghost TV shows,” and so on.

Comments are disabled on this article, due to the large number of people who try to use this site to reach the TAPS team. Fiona is not part of TAPS and never has been. As of 2017, she rarely investigates private homes, and only at the request of a fellow professional. If you’re tormented by a ghost, see this list of professionals.