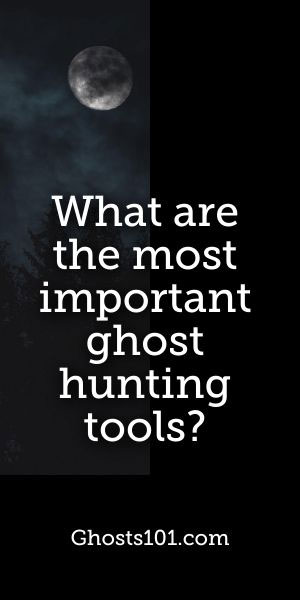 The most important ghost hunting tools are your five senses, and possibly your sixth sense, if you believe in it.

Nothing is more important than personal observation.

Never rely on ghost hunting equipment that absorbs your attention.

They can prevent you from witnessing an important paranormal encounter.

In some cases, you’re at risk if you’re distracted by ghost hunting tools.

For example, you can trip and fall if footing is uneven at an outdoor setting.

Indoors, many haunted buildings have been abandoned, and the floors can be littered with rubble, or unexpected irregularities on stairs. (This is why I often include an ace bandage in my ghost hunting backpack. Accidents happen, and probably more often than we’d like.)

Start with a camera

My advice…? During your first few ghost hunts, take only a camera that you’re very comfortable with.

Your camera phone is fine, as long as it’s set to take flash photos in low-light conditions. (If it has an ISO setting, choose something around 400 or slightly higher.)

Even a camera can be a needless distraction. But, a great, ghostly photo confirms that something unusual was going on at the haunted location.

Generally, if a site is actively haunted, a lot can happen suddenly, and all at once.

As a beginning ghost hunter, it’s easy to feel overwhelmed or even frightened.

(That’s true for experienced ghost hunters, too.  I was baffled by conflicting evidence at The Myrtles Plantation. Bizarre events at the Falstaff Experience – Tudor World – disoriented me, too.)

So yes, even the most stoic ghost hunter can become startled when unexpected physical phenomena occur.

Q. What’s worse that being startled by unexpected phenomena…?

A. When something dramatic happens, and you miss it.

Maybe you were too busy reviewing your photos or staring at your EMF meter.

That’s happened again & again, during ghost hunting events, and even at some professional investigations.

Don’t miss a thrill or a chill

Don’t miss the excitement of ghost hunting. I’ll say this repeatedly: Rely on your senses, not research tools.

– Look for lights and shadows and anything unusual. (Many visual anomalies are seen “out the corner of your eye.”)

– Use your hands to detect baffling areas of hot and cold.

– Some people are sensitive to ghostly odors.

So, your five senses are your best, first tools for ghost hunting.

If you’re a “sixth sense” person, pay attention to that, as well. In fact, that can be your most important sense, particularly if it warns you of danger.

Then, add something… maybe

As you gain experience, add new tools one at a time. Learn every nuance of each tool or device before you move on to another one.

Discover how each ghost hunting tool responds to paranormal phenomena. Run tests– multiple times in different settings — to see if it works well for you.  (Don’t waste your time with any tool that requires your full attention, all of the time.)

Many ghost hunters who get great results with one kind of tool are less successful with others.

For example, I’m great with ghost photos, but not as successful with EVP recordings.

Likewise, many researchers who are adept with EVP don’t have equal success photographing ghosts.

It was a topic of discussion at one New England Ghost Conference where I was the keynote speaker.

Consistently, people at that conference reported one of two things:

No exceptions. And no one had a plausible theory to explain this.

In other words, expect to specialize.

Try a few basic tools. See what works best for you. If certain tools don’t work well for you, you’re not incompetent or anything.

It’s normal to excel in one area of ghost hunting, but not in others.

But, no matter which tools you use as a ghost hunter, don’t let them distract you.

Your best discoveries will come from first-hand research using your own five (or six) senses.